When I was in college, I played football. Not that I was anything to talk about because I mostly sat on the bench. But there was a first-string dude that I was buddies with where things used to happen. It was never like we planned it or anything.


One time, he showed up to shoot the shit — you know, like to hang out. I remember telling him my shoulder was messed up from a bad play and he offered to massage it to relax the muscle.

After that, the rest is history. We ended up messing around. 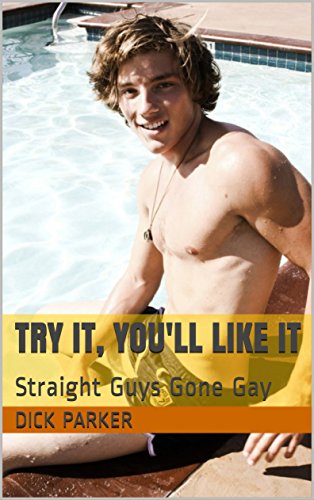 Over the course of a year, it happened a few times. The dude is married now and so am I. When I was back in high school, I dated this girl from my neighborhood. She had a brother who was the same age as me and we became friends.

These 10 ‘First Gay Experiences’ of Straight Men Are Sexy, Funny and Kinda Sweet

One time while we were hanging out, he shared with me that he was bi. He asked me if I had ever been with another guy and I told him the truth — never. I guess there was a part of me that was curious.


The weird thing is the girl and I never messed around — not even once. Back then, I think I was just figuring things out and he was somebody to do that with. When I was 19 years old, I worked at a hotel as a bellman. Frequently, male guests had me bring up their luggage. At least five times I ended up staying a little extra. It was always for a big tip. When I was 19, I used to play ball in our neighborhood league. There was this one guy I used to get with after practice.

I felt, in my increasingly anxious and deflated state, that I was being left behind. My first year at college, apart from being grueling mentally, was hardly a sexual smorgasbord of one-night-stands and hook-ups.

Instead, I reverted to my teenage years, pining after straight boys who I knew I had no chance in hell with The boy told his then-girlfriend who I knew about , saying I had come on to him but that nothing had really happened. Although one thing I can vividly remember was that it was quite literally the other way around, the visceral shock of being somewhat shoved back in the closet and denied the celebratory expungement of my virginity was palpable.

And while at the beginning I felt like I had the upper hand in the situation—I was the one who was out and comfortable in my sexuality, right?


I never learned whether the boy I lost my virginity to was struggling with his sexuality. There you go then. Most of the people I chatted to on there said that they identified as gay. People have called it an app for straight men because of the design, the logo, the name, the fact that interactions include 'fist-bumps'.

But maybe that kind of behaviour doesn't have to be restricted to the 'straight' male community. After all, isn't that, in itself, just conforming to another socially-constructed idea of gender and sexuality? This app has caused loads of media speculation because, in some ways, it all seems so confusing.

People have taken it as an app for confused people. Maybe we're just thinking about it too much though.

Maybe it's all pretty straightforward. Like BRO's mission statement puts it, a place, "for men that are interested in meeting other men… as simple as that". Like I'm doing it all in secret.

That's not because I'm a homophobe who doesn't want to be tarnished with homosexuality. It's because I'm in a happy relationship and I wouldn't want the missus or her mates catching me on there I think that's all it is, anyway. I was 'marriage-shamed' for getting engaged at Gay conversion therapy: All Together Now: The choir singer dedicating his song to fellow members of the trans community.